I have a long and broken relationship with two little letters in the English language: M.S. They seem so insignificant, but when placed together they mean much more than that. 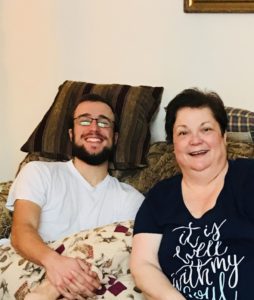 Josh and his mom, Janet

M.S. is an abbreviation for Multiple Sclerosis, an auto-immune disease that affects 400,000 people in the United States. White blood cells, the body’s natural defense system, get tricked into thinking that the grey matter of the brain is harmful and they attack it. This causes lesions and scar tissue on the brain itself. Some people’s MS is progressive, which means it gets worse over the course of your life, eventually leading to death. Others have a relapse- remit variety, where sometimes symptoms are worse (called exacerbation), and times when symptoms are better. This neurological disease slowly but surely takes away from what you used to be able to do. This means that the visible results are very dependent on the extent of the damage; some people have very noticeable handicaps. while others barely show symptoms.

My mom was diagnosed with relapse-remit M.S. about 3 months after I was born. This means I have been around M.S .my whole life. I’ve seen it take away my Mom’s ability to walk without a cane or walker. I’ve seen her fight extreme fatigue. I’ve seen the nerve pain it can cause in the back and in the legs. I’ve seen it affect her memory and her sight. I’ve also seen her push herself too hard, trying to live her role as a mother which led to her having exacerbations.  M.S. is awful, plain and simple, and I would never wish that on anyone. So when I found out that the homeowner I was building a porch and wheelchair ramp for has M.S., it stopped my dead in my tracks.

We were a couple weeks into building the porch and ramp for Dream, who is wheelchair-bound,  but I was afraid to ask her why. If she wanted to tell me she would, but otherwise I wasn’t going to pry. However, one afternoon she told me that she had M.S. I dropped whatever I was doing and immediately gave her my full attention. I asked her about her M.S. and what all she had been through. Her M.S. had some similarities to my Mom, but also some differences (everyone’s journey with MS is different). But I understood her when she spoke of her pain. She didn’t have to explain, but suddenly I knew how it must be hard for her to not be able to be the perfect parent to her kids. I knew the fears she had.

Dreama was also incredibly welcoming to us. She always invited us inside for lunch to get out of the cold and wet weather. She would always pray with us before working, before lunch, and before leaving the worksite. When the weather was nice, she would be out with us trying to help in whatever way she could. Thinking back on that, I know that is exactly what my Mom would have done. She is very welcoming, has a deep love for God, and desires to help whatever way she can. With all that being said, I believe that God placed me in that situation for a reason and for that, I am very grateful.

I know very well there is no cure for M.S., but I could still do something for Dreama. This ramp built by volunteers and me will make her life just a little less difficult and take a small amount of stress out of her day.

M.S. stinks, but thanks to God and Nazareth Farm, we won a little victory over it.

Thanks to all the volunteers who worked so hard on such a meaningful project!